Bring on the Bronze match

Alice Zeimann and Shaunna Polley pushed the fancied Canadian duo Melissa Humana-Paredes and Sarah Pavan all the way - after another epic extended first set, the kiwis showed all ther skills and teamwork before going down 1-2.

"We're super stoked," said Shaunna Polley. We've always looked up to them as athletes and players, and to go toe to toe with them, with such long rallies, it's an awesome feeling."

The Beach Ferns will play Vanuatu pair Miller Pata and Sherysyn Toko for Bronze at 7am Monday NZ time, which will be live on SKY Sport 6 / Birmingham 3 or Sky channel 056.

"A big part of tomorrow will just be concentrating on ourselves, and just playing our game, trying to enjoy it and leaning in to the pressure, we're excited," said Alice Zeimann.

Like the two teams' pool match, the first set went the distance, with the kiwis closing it out this time 31-29, with both sides having multiple set balls and saves. The set started with the teams going point for point, before Canada took a slight edge - but the kiwis fought back with a clutch Zeimann ace bringing it back to 20-19 and a desperate Polley dive locking it up at 20-all. In the end a Humana-Paredes soft block drifted out to give the Ferns the set, to their delight.

The Canadians took control of the second set early and extended their lead to 17-9, before the Ferns could get back in the game, but it was too big a hill to climb.

The third set again went largely point for point, with the Ferns pushing hard and saving rallies with some big Polley serves getting vital points, and a mix of power and subtlety at the net. They earned a side out at 11-10 with a well placed Zeimann touch, which she followed with a massive block to get to 13-13. With both teams desperate to close the match out, the Canadians' experience showed, despite a tremendous Polley dig and soft touch at the death, taking the third set 19-17 and the match.

It was a performance to be proud of, before re-focusing on the match for third place and a medal.

"Every time we play it becomes more and more comfortable," said Alice Zeimann. "Shaunna is great, she's been in that moment before and the fact we have such good chemistry just really makes it easy on the court."

There were contrasting fortunes in the Birmingham 2022 quarter finals, with the Beach Ferns confidently accounting for England 2-0, but Sam O'Dea and Brad Fuller going down to an inspired Rwanda pair.

Polly and Zeimann will face Canada once more for a place in the gold medal match at 7am Sunday morning NZ time.

The Ferns were in good touch from the start of their match against England on Saturday morning NZ time, going point for point with the home team.

A series of strong Zeimann blocks at the net took the Ferns to 9-6 in the first set, with both players showing subtle touches and great placement, with Polley effecting some assured cutaways at the net. A great Polley serving run helped maintain the 3-4 point lead through the middle stages, before taking control at 17-11 and closing the set out 21-13.

From there England battled valiantly to get to 7-7, before the Ferns went to an 11-7 lead. Polley was in fine form at the net, making some massive spikes and great digs before a big Alice Zeimann block took them to a 17-10 lead. There were some nerves on match ball with England fighting until the end, before securing the second set at 20-15.

Earlier that day Beach Blacks Sam O'Dea and Brad Fuller only showed their form in patches against Rwanda, who were playing the game of their lives.

In bright windy conditions the NZ pair got off to a slow start, taking time to get into their rhythm and finding it hard to negotiate the towering Venuste Gatsinzi's strong blocking and spiking game at the net.

After a great scrambling point at 11-15 down the kiwis began to click, chipping away at the deficit before losing the first set 18-21.

Rwanda again got out to an early lead in the second, and it took a couple of big plays from Brad Fuller, who was getting into the game, to bring it back to 9-9. The Beach Blacks were able to exert pressure on Gatsinzi, and Rwanda, taking a two point lead through the middle stages.

"They served really well and kept the pressure on us. I have to say, good on Rwanda, they played well," said Sam O'Dea. 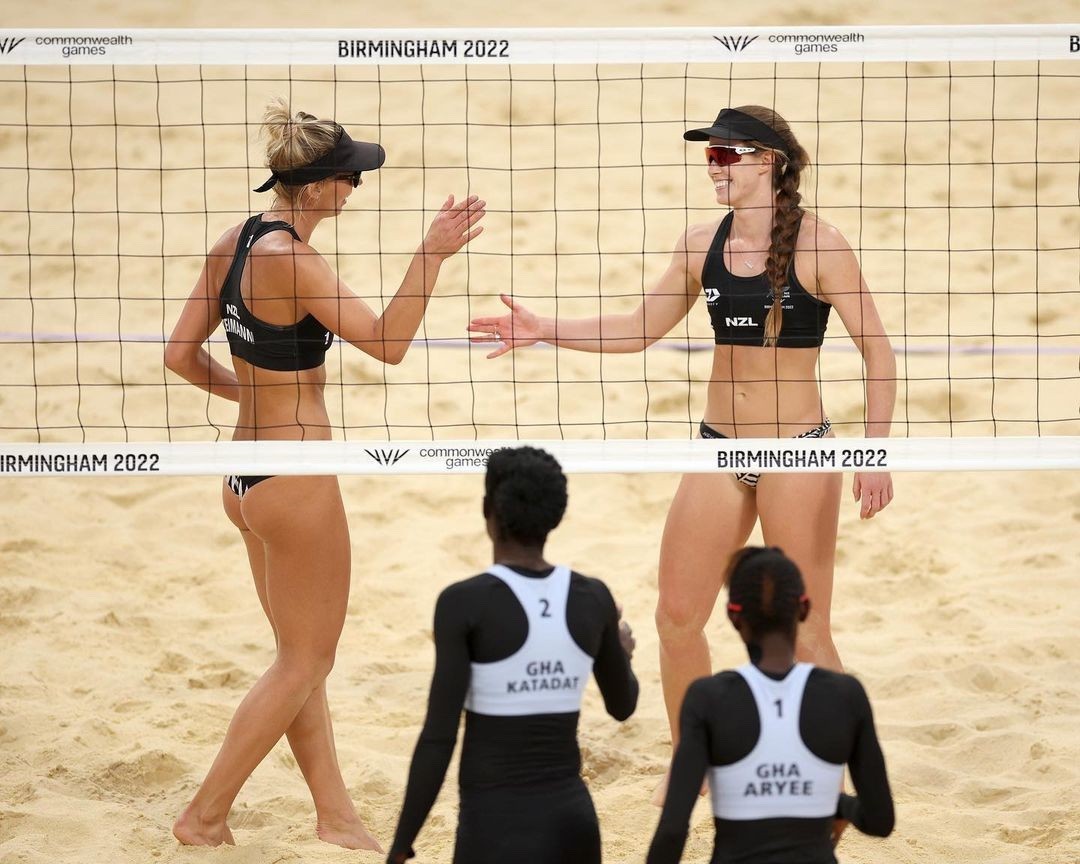 NZ go unbeaten in round two

Two wins from two games for the Beach Ferns and Beach Blacks means both have qualified for the quarter finals - but both expect a tougher test in their final pool matches.

Shaunna Polley and Alice Zeimann pulled out some big serves and moved well around the court to beat Ghana 2-0, despite their opponents coming roaring out of the blocks in the second set. The Ferns took a tactical time out early in the second set to regroup, and were able to close the match out 21-10 and 21-13.

"There was lots we were working on against Ghana and wanting to bring into that match and really work on our game. We wanted to run our plays confidently, and I think we were able to execute that in the match. We also wanted to serve really tough, we knew that would be a big part of our game, so we're proud of that, we took lots of risks there," said Alice Zeimann.

"Ghana did come out strong and the second we just kind of reset and the timeout we backed ourselves to sight out the next fall and just knew we had to lift our intensity a little bit and kind of just weather that storm. So I'm proud of us for you know, being able to stay composed it feels awesome to qualify for the quarterfinal."

Brad Fuller and Sam O'Dea beat underdogs Tuvalu 21-14 and 21-17, seeing off a spirited challenge in some breezy conditions. Both teams showed great commitment to scramble on defence, with the Beach Blacks able to use their height advantage at the net with some big blocks and spikes.

"It was a little bit fresh out there, but I think the Tuvalu guys just came out with a lot of aggression. We cruised through the first set a bit and I think maybe just relaxed a little bit going into the second. That let them back in and the next minute it's a game, they certainly brought it to us."

"It was good to get pressed and face a challenge. But yeah, definitely wasn't our best game, we'll look at some video tomorrow, and then we'll have a practice," said Sam O'Dea.

The Beach Blacks play England at 7am Thursday NZ time, followed by the Ferns' match against Canada at 8am NZ time, both matches are on SKY Sport.

"The crowds gonna be a big thing against England, both games the crowd has been against us, going for the underdog, and it's going to be another level for sure when we play again but we expect it - we're just taking it one day at a time," said Sam O'Dea.

"We're just focusing on our last pool game against Canada. We're super excited to play those girls, they're a world class team. So yeah, we'll be resting and getting our minds and bodies right for that match," said Alice Zeimann.

Bring on the quarter finals

Both NZ teams are well placed to make a medal run after a tough final pool matches at Birmingham 2022.

Beach Blacks Brad Fuller and Sam O'Dea go into their Quarter Final top in their group, after a strong performance against English brothers Javier and Joaquin Bello.

The match was a step up in intensity against a committed home side with a noisy partisan crowd behind them, but the Beach Blacks were able to put their game plan into effect well.

"We were looking to serve more on the blocker or the right side - we had certain shots we're playing for with deep angles having watched the footage of the Bellos. We talked a little during the game, and changed who we served to, which worked quite well," said Brad Fuller.

England started the first set slightly ahead after a breathless start from both sides before Fuller and O'Dea drew level at 9-9, with some big O'Dea blocks at the net getting the team back in the game, before taking close first set 21-19.

Fuller showed some subtle touches at the net to help get out to a four point lead early in the second set with both sides scrambling on defence. The Beach Blacks took a crucial timeout late in the set before taking control to close it out 21-16.

"The crowd was the loudest I've ever been a part of, especially when they came back at us in the second set, but I think we handled it really well, taking our timeouts in situations through the match and managed to clutch the point just after, which was awesome," said Brad Fuller.

Beach Ferns Shaunna Polley and Alice Zeimann went toe to toe with the highly rated Canadian pair of Melissa Humana-Paredes and Sarah Pavan with an epic first set that went all the way to 32-30.

"The first set was super long, and really fun to play. I'm really proud of us for how we, for the most part, played our own game and really established lots of our plays. Obviously it's a bit disappointing not to clinch that first set, I think it really helped their momentum going into the second," said Alice Zeimann.

The kiwis got away to a five point lead early, before Canada ate away at the deficit with some well placed spikes to get level at 15 all. From there it was point for point with the Ferns scrambling spectacularly to level at 20-20 then 22-22 before the epic point for point end to the first set.

The Canadians carried that momentum through the second set, running out 21-10 winners - but the Ferns will take heart from this performance.

"It was great to play them, they're a world class team, it really helped us to get into a game with them." said Alice Zeimann.

"It's only the first attempt so we really hope for another chance to play them."

The Beach Blacks and Beach Ferns finish first and second in their groups, and will know their quarter final opponents at the conclusion of pool play. 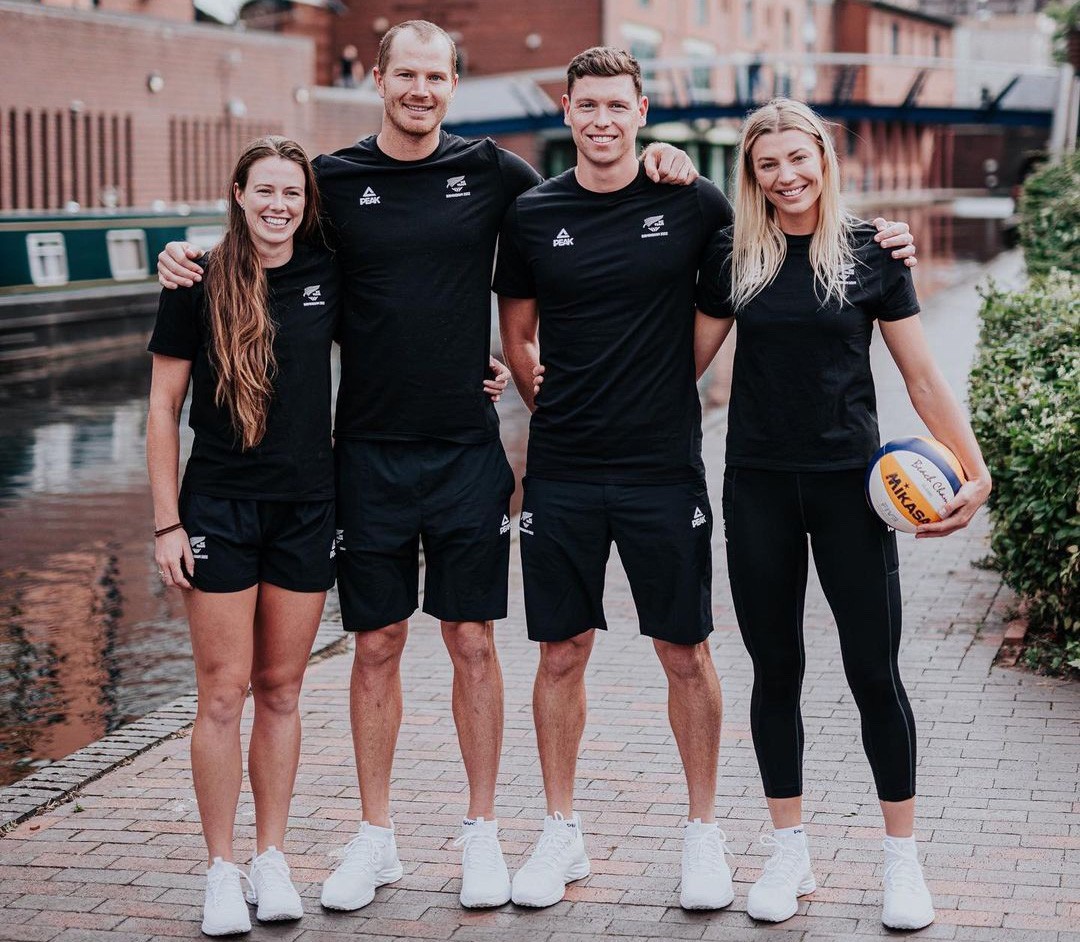 Where to watch and follow our Beach Ferns and Beach Blacks at Birmingham 2022.

SKY TV have six channels dedicated to the Commonwealth Games with a focus on kiwi athletes - times are below, or use the handy kiwi athlete schedule.

Get behind the scenes with the Beach Ferns and Beach Blacks at the Games.